A book in a year – The Rescue Year

My most recent ‘proper’ writing project, The Rescue Year, is one that I feel just a little bit proud of. You see, from inception to being fully typed up and the first wave of edits complete, it has taken just 11 months to bring the story together – 80,000 words, 2.5 A3 notebooks, 300Kb on the memory stick, and a fair amount of coffee. (OK, to be honest, it took 11 months and 10 days, but that’s close enough.)

I never intended for it to happen like that; that’s just the way it went. A paragraph scribbled down each day on the way into work, two pages at a time over a cappucino whenever in a coffee shop, writing the last 1,000 words on the southbound boat on my last trip to Shetland… It would be possible of course to write a lot more during the year, but given there’s been no slacking in my running, my work, or everything else that life brings, it’s not a bad tally. 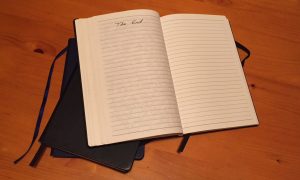 Seeing as I’m not yet published (which should hopefully change within the next 12 months), I can’t offer any credentials of the quality of my writing, but I will say this which I have probably said before: for me, it’s always about the story. When I can see one or two of the settings where the story takes place, and can imagine myself there; when I can see the characters and know how they would react to anything; then the story just flows from my nib. The downside  is that where I create characters that it is easy to love/hate, I genuinely feel sad writing the last paragraphs, knowing that I am saying goodbye to them. That’s especially so when the book is a standalone, not part of a series

Nor is the story preplanned; I usually have a starting sequence in mind where the characters make their way onto the stage, and I usually know how I want it all to end, but in between – anything can happen. (I never intended, for example, for a dog to feature in The Rescue Year – but at some point he just sort of strolled off the pen and introduced himself.) If I think I might get stuck, I have a rough ‘storyboard’ drawn up, but that doesn’t mean I’ll stick to it!

About the Book (so far)

So, what is The Rescue Year about? No spoilers – and obviously a literary agent or publisher may well ask for changes – but at the  moment, the following is what the blurb’ on the back might look like.

“The Rescue Year” is a story of the future.

But this is not a future of technological marvels and new worlds; it is a future where entropy and division have taken hold.

Into this landscape travel Ewan Rogart and Evie Yatoub, two ‘traders’ from The Isles on an illicit mission. When they rescue a young woman who turns out to be one of the feared and hated ‘snatchers’, their lives are changed forever. They must make the perilous journey to the all-powerful capital city in order to save everyone they know from a terrifying conspiracy.

The Rescue Year will take the reader through the dark streets of the mighty capital where the yeomanry hold sway, along the decks of the sailing ship “Hyperion”, and explore the beautiful but remote islands where those labelled as ‘Recidivists’ live.

I would be lying if I said the whole narrative around Britain’s exit from the EU hadn’t influenced this book (it has), but hopefully the reader will be able to bring their own interpretation onto  what the story and characters say. I might also be lying if I said “The Isles” in the book aren’t partly inspired by Shetland… but perhaps I’ll leave it to the reader to decide where their location might be.

So what happens next? Well, don’t expect on the bookshelves in time for Christmas, for starters!

Next step is a bit like baking a cake, where you need to leave it to cool after being in the oven; I need to leave the story for a month or two (some would say a year, but I don’t always hold with that), then revisit and proofread it. After that, I’ve learnt from Sunset which took so many years to prepare for publication – I will be looking for someone with a fresh pair of eyes to offer an editorial critique.

And then and then… Then I will be ready to start submitting. I might well have found an agent for Sunset in the interim, but with The Rescue Year  being less of an epic, as a first-time novelist it may well prove easier to gain their interest.

So in the quiet hours in between that and re-submitting Sunset to agents, I will be starting to tell/write another story. Whether that will be bringing Threads or Hamefarin to completion or something new I haven’t decided yet – that’s part of the fun of writing!

Thank you to all who continue to encourage me in this and who give me tips and advice – it really does matter.

As ever, please do keep checking back! The front page of my website will always flag any updates, and I do intend to try and put some short extracts up here. And if I move down the avenue of self-publishing, I will definitely be posting out updates on social media and looking for more advice!